[tl;dr: skip the windbag intro and shoot straight to the recipe!]

The 2012 Hitchin Beer Festival is now firmly in the past. At the end of the festival there was some beer left and us volunteers got to take what we can home with us. Cask ale doesn’t keep too well, so there isn’t a lot of point taking more home than you’re likely to drink in the next 24 hours. However, beer can be for cooking as well as for drinking. When the festival shut its doors there was still quite a lot of the Windsor & Eton “Treetops” stout left at the end – despite it being our “beer of the festival” winner. Windsor & Eton suffer, but perhaps profit in this case, from being at the end of the alphabet and thus at the back of the hall. Treetops was brewed to celebrate the Queen’s Diamond Jubilee and is named after the African estate she was at when she inherited the throne. It is described by the brewery as “a rich, intense Africa Export Stout brewed from a blend of British and African ingredients, including coffee and vanilla” – my mouth waters as I copy-&-paste those words! All in all it was a very worthy festival winner, though my personal vote was cast for the same brewery’s “Conqueror” which has a little more “hop” in its step.

A good rich stout generally makes for a good stew and with this in mind I trundled home after closing up at the festival with 6 pints of Treetops in my bag (plus 2 pints of “Conqueror” and 2 of “Windsor Knot” – my own mini @webrew festival!).

I’ve used beef shin as my stewing meat. In my opinion it cannot be beaten for this sort of long-slow cooking. It doesn’t need any fancy trimming, just take the shin as it comes from the butcher and quarter of halve each round – purely for convenience in handling. Once it is cooked it should be fall-apart tender. If you can’t get shin then any cut sold as stewing steak will do.

The practice of flour-coating meat is a little controversial. Older books refer to it along the lines of “sealing” the meat to keep the “juices in”, which doesn’t make a lot of sense as a bit of flour isn’t going to achieve this. Let alone the fact that we want the juices to flow freely between the meat and the stew stock. That said, I do think it may have a role to play in both caramelising the meat and in thickening the stock – of course you can add it any old way for the latter. If for no other reason, then I’ll do it because it is kind of fun and feels “right”. Skip the flour if you prefer! On with the show…

To extend with vegetables add:

Thoroughly mix the spices into the plain flour. Use a fine sieve to sprinkle this over the beef pieces until they’re entirely coated. (Use of a sieve here means excess seasoned flour can be kept for another time.) Heat 2tbsp of vegetable oil in large casserole, I use a 28cm Chasseur – a sound investment I made 8 years ago. Heat the oil until it begins to smoke and then place meat in to brown. Do this in 3 or 4 batches, the chunks of meat should sit in the bottom of the casserole without touching each other. This ensures moisture can escape and you caramelize the meat rather than simmer it in its own juices. Coat the base of the pan with another tbsp of oil between each batch – don’t be afraid of smoke. (The smoke detector in my kitchen never has a battery in it!)

With the browned beef shin placed to one side add another tablespoon of oil to the pot and toss in the chopped onion. Sweat and brown the onion over high heat, using a wooden spoon or, better yet, a flat-edged wooden spatula to scrape the browned goodness from the base of the pan with the sweating onions. Do this for about 5 minutes and then add a cup of the stout and make sure the last flavoursome crusty bits are worked off the bottom of the pan. Now add the tomato paste, garlic, ginger, and stout. Bring the stew to simmering point, place a cartouche of baking paper over the stew, then the lid on the casserole. Into the oven! (The “cartouche” is simply a piece of baking paper cut to exactly fit the casserole – to make this I put the casserole lid on a square of baking paper and run a knife around it. This paper is placed directly on the stew, enticing out most air bubbles. The theory is that this means the liquid evaporates more slowly and any meat near the surface stays moist. However, IANAC!) 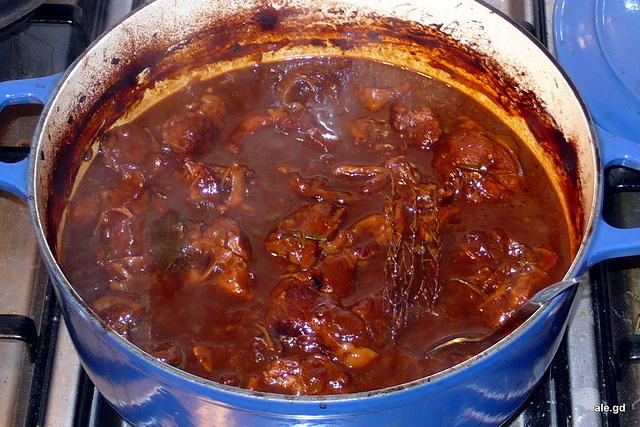 Check the stew after 4 hours. The meat should be tender but not disintegrating, the liquor should be thick, deep brown, glistening, velvety, sumptuously rich&hellip; do taste some with a spoon, carefully. At this stage you have an excellent stew and could stop right here! Barring any desired salt or sugar adjustments, it should need some salt really. However, if you want to extend the stew with the addition of the vegetables continue…

I’ve chosen beetroot and parsnip, which release a lot of sweetness. However, about 1 kg of any typical stewing vegetables will do. Carefully, so as to not break up the meat too much, stir the raw vegetable cubes through the stew and add the extra pint of stout. Bring to simmering point on the stove again and then pop back into the oven for an hour at most, lest you over-cook the vegetables. Adding the vegetables at this late stage ensures that don’t turn to mush and retain a bit of “bite”.

There you have it. A great stew that will be even better after a day sitting in the fridge.

Enjoy with a glass of stout and a refreshing green salad with a sharp vinaigrette dressing. I didn’t have a Windsor & Eton Treetops handy alas, but the BrewDog Imperial Russian suited. Dig in! 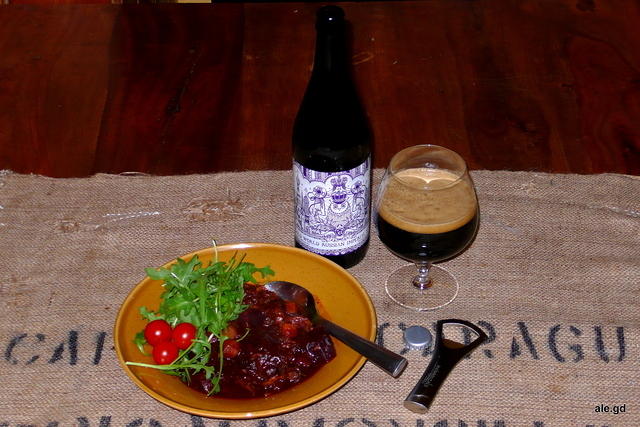 For more helpful guiding photos for this recipe click here for the full Treetops Stew gallery.