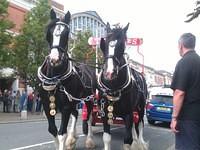 Great Beer & Great People: complimentary ingredients. There is nothing more sad than drinking a beer alone, and nothing more dull than a gathering of people sans beer. Hyperbole aside, GBBF is generally a very friendly and happy festival I find, compared to some others I know well. I’m not sure what the magic ingredient is — perhaps the sheer size of the thing is important? Anyway, here’s a run–down of some great “people” moments at GBBF 2012.

Every time a glass is dropped a great cheer goes up. It’s a beer festival classic.

The people you go to the beer festival with. They’re half the motivation for going all the way to London. The prospect of hanging around the festival is much more pleasant if you know you’ll have friends present. Alas this year Kat was unwell… but my fellow North Herts CAMRA committee cronies were going to be in attendance — sorted! Attending the festival as a CAMRA group isn’t as dreadful some folk would think. We’re not talking the “beardy weirdy” stereotypes.

On Tuesday I attended with one fellow committee member who’s a multinational engineering wheeler-dealer in the telco — Andy has run the North Herts festivals for years now, and is also the proprietor of one of the branch’s best pubs (the Our Mutual Friend in Stevenage). On Wednesday Matt Williams (another “young” 30ish committee member like myself, current festivals organiser) and a friend were my core company — and we bumped into a couple of other North Herts friends from time to time as well. Not a single beard between us… though some may rightly consider my festive mohican haircut quite weird.

It’s always great talking to brewers about their winning beers. Whether or not they’re CAMRA fans I find brewers are always appreciative of a bit of public recognition for their hard work.

A GBBF 2012 highlight for me was chatting to Bob from Son of Sid brewery — who was bubbling over with joy at having won bronze in the mild category for Muck Cart Mild. A great chap who’s genuinely enthusiastic about beer and brewing. Modern punk-type beer snobs knock milds, and anything even vaguely traditional… I feel sorry for them. Despite the none too alluring name, Muck Cart is excellent and I’ll make a point of trying to get hold of some for our next beer festival.

I was lucky enough to bump into “Hardknott Alex” — the new(ish) face at one of my favourite breweries (Hardknott… duh). We met supping foreign beers at the German / Eastern Europe bar. Heathens! A long, twisty, and fun conversation about brewing, CAMRA (the good, the bad, and the ugly), and beer ensured.

Alex introduced me to his accomplice Adam (oops!) from the Derby Arms (nowhere near Derby, but conveniently en-route to Hardknott). It sounds like a right brilliant pub and I think I’ll be staying there on one of my fairly regular trips to the area. See, GBBF: constructive, not just a drink-a-thon.

Drinking with Pete — landlord from the Live & Let Live in Cambridge. He’s a “Black IPA” fiend, blacker & more hops seems to be his mantra when it comes to beer. In his pub you’ll usually find some of Oakham’s best beers – be it Green Devil or a darker form of the  IPA art. Pete was kind of smashed… no surprise, he’d been drinking pints of Stone’s Sublimely Self Righteous black IPA — weighing in at 8.7%. I duly had a half-pint myself, beautiful stuff. I think it’d have been better in keg format though. I tend to find the cask US beers are just a bit too cloying and work better (for me) to be served at a cooler temperature, probably with a little more fizz. 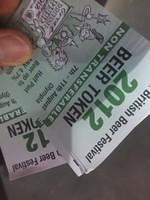 Meeting the brewer from Ska Brewery. Brilliant brewery name! Terrible flash/noisy website. I’ve forgotten the dude’s name alas, but it was good chatting with him about the differences between British and US IPAs. He’s keen to sell his beers to the UK market — I certainly wouldn’t mind seeing them over here a bit. From all the good reports I’ve heard about his visit & reception in London on the grapevine I expect there may be some interest. I kind of accidentally ended up with a whole pint of his 10% Imperial IPA – Decadent. Ah well… beaut stuff though. Just a tad too much caramel for me, as is my usual complaint for strong US IPAs. I picked up some bottles of Ska Brewery beers to take-home the next day… tucking into one right now!

Before heading on his way he handed me a few beer tokens :) Can’t complain!

Tapping a dude on the shoulder to ask where he got his t–shirt. It was a Weird Beard Brew Co shirt, of interest to me as I’ve been following Bryan Spooner on twitter ever since meeting him at the 1st Brewdog AGM. Bryan & another bloke called Greg Irwin are working on getting a new craft brewery going in London. The chap I tapped on the shoulder was Greg. I sat with Bryan, Greg, and Andy Parker (and their respective GBBF accomplices) for the remainder of the evening. Buggered if I can remember much of the conversation though, I think the strong American brews were getting to my head! (Good thing my hotel was 50 meters from the entrance.)

Bumping into Tony – another 1st-wave BrewDog shareholder who I’d not seen since that first AGM. He’s a fellow techie who used to work up Glasgow way but has now moved to London. So hope to catch up again sometime — probably in a “craft beer” establishment! :) [We did in fact, not long after at Brodie’s #witterfest!]

An eclectic collection of folk work behind the GBBF bars; from festival organisers, through CAMRA volunteers, to brewery employees. They’re all doing a great job. Some get a bit grumpy, but what would a beer festival be without a grumpy volunteer or two. They’re not being paid to be there so I try to cut them some slack.

I tend to find the brewery bar staff the most interesting, most of them will have brewers present from time to time and all are happy to talk about their beer (and listen to polite criticism!) I found the Thwaites and Brains bars particularly friendly and helpful this year (they also had the best brewery-bar beer IMO).

One of the bars this year was tweeting, this definitely added some character to the GBBF twitter presence! The bloke running it, Ben, was wearing some sort of weird drag outfit… I never did find out what the story behind that was (assuming there is one!)

If I’ve left someone out then it is through befuddled memory! So many excellent folk, such a mixed crowd, and a super-friendly atmosphere. It was grand!

Even the live music was excellent!
(No, not the bloody Skinner’s band…)