@HardknottDave is a beer geek who also happens to be a brewer of some quite awesome beers. As with many small breweries the geekery doesn’t stop at the beer – Twitter[1] seems to have become a bit of a beer community phenomenon. I can keep tabs on the majority of the interesting UK beer scene by following a small knot of the UK beer hardcore, a collection of both brewers and drinkers. This is an incredibly useful research tool, the topic of research being “what beer should I buy/drink next?” Weighty and important stuff. This Twitter “miniverse” is a loose-knit network of like-minded folk. If I were to visualise it it would be sort of like Omega Centauri. A dense highly connected core in the middle, folk constantly chatting about beer at a personal level. Here we find the @HardknottDaves (brewer), @MellissaColes (beer evangelist), @BeerReviewsAndys (beer blogger & beery IT), and @simonhjohnsons (enthusiastic drinker?) of the scene. These people generate the constant core thread of UK beer talk. As you get out towards the edges you pass through a dense zone of popular but less personally involved entities – accounts acting under the persona of a brewery/retailer/organisation – followed by many but interacting with few or none. Some, more centrally, take on a persona and interact 1:1 with many followers – such as @BrewDog – but have the kind of tinny hollow impersonal feeling of marketing. Others really are just one-way-spews of marketing announcements – though nevertheless of some interest. Finally as you gradually move out to the darkness of empty space you pass by the wider community of people who simply like beer and have the occasional interaction with the core. These folk dip in and out the the thread, a reply here and there, a retweet from time to time. Maybe once, maybe a couple of times a day.

This interesting and diverse community has given rise to a new class of “distributed event” – such as Twitter beer tastings. I’ve seen it done a few times, sometimes based around a whole selection of beers sold in a box for a Twitter “beer festival”, others a varied set of beers for a Twitter/blogger #OpenIt event. There are always a lot of interesting beers being consumed out there! 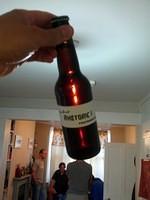 All this is beside the point in the title: #OpenTheRhetoric – a Twitter event for a Hardknott brewery special release. Rhetoric Ed.I – the first in a series of special beery one-offs by the brewery. This beer is described as “Star Anise Infused Quasi-Bombastic Belgique Quad” – if that doesn’t raise an eyebrow & pique your interest then you’re dead inside. An empty shell I tell you. Dave, Ann, and Alex at Hardknott distributed a small selection of Rhetoric to various beer bloggers and geeks prior to the official release, the beer wasn’t quite ready at the time (needed a little more bottle conditioning time) and we had to promise to not open it until the Hardknott beer-signal had been issued. I was lucky enough to get my mitts on a bottle when passing by the brewery to drop off empties from the Hitchin beer festival.

This sort of “one off” beer series isn’t a new idea. You could say it goes back a very long way in some respects – in the “old days” of brewing many beer batches would have been different from time to time, season to season. I can picture ye olde beerwives tossing something interesting into the brew, some warm spices in Christmas perhaps, a dead rat for a favoured cousin – then again I may be over-romanticising the past. Anyway, In more recent times real ale breweries in the UK often have a slot for a rotating “brewer playing around a little ale” (usually very conservative “playing”), sometimes such a brew works so well it becomes a permanent offering. Regardless of the format, releasing such varied beers is a great idea and an excellent service to those beer geeks like myself who’re more interested in change & difference than the tried and true & old and reliable. BrewDog are well known for this sort of thing in the form of their Abstrakt brand – so far I’ve religiously bought a few of every release (and still have at least 2 bottles of all of them). I’ve also recently noticed Arbor Ales doing a similar thing called “Freestyle Friday” – the 2012 Black IPA was particularly tasty, though a little over my bitterness threshold!

It especially tickles my interest when the beers are strong and have cellaring potential – full of hope we buy them and put them somewhere stable and once a year, say, we pop one open and enjoy the liquor within while radiating a self-satisfied smugness. Sometimes after a couple of years these beers taste like shoe polish & vinegar – with a small sob in remembrance of better times they’re interred in the u-bend of the sink.

Back to the beer that is, sadly, no longer at hand! You can read the original Rhetoric rhetoric here on Dave’s blog and you can read another blogger’s notes on the beer & event too. There are also, of course, a fair few comments lingering on Twitter, though they’ll vapourise in a short time. I see one RateBeer ticker got hold of it as well – it is also on Untappd thanks to myself. 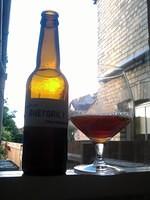 I sampled Rhetoric Ed.I with about 8 other people, so I only had a few sips. It was also at the tail end of a day-long house-warming party. Thus I’m not going to offer any detailed thoughts on tasting notes and not make any attempt to give it any “rating” – I suspect we’re talking a 4, but maybe a 5, on Untappd from me. The aniseed was distinct, surely, but it wasn’t sickly & medicinal, Rhetoric came across as definitely beer not an alcopop oddity. I enjoyed the beer immensely – pleasingly everyone else who had a little enjoyed it too (to varying degrees). This includes a couple of folk who really aren’t keen on aniseed flavours at all, and another who really isn’t keen on beer full-stop. He also enjoyed the Hardknott Colonial Mayhem – there seems to be some strong beery evangelism built into Hardknott beer and I expect the conversions haven’t stopped at Hardknott Ann.

I’ll be buying some bottles of Rhetoric Ed.I – and so can you, while stocks last, just follow this link to the Hardknott shop!

[1] I’m not sure if there is any sort of similar projection of the community into Facebook – I don’t touch Facebook because it isn’t open, it isn’t friendly, it “farms” users much like dodgy food industries farm battery hens. I suspect Twitter may simply work better for the beer community due to its simplicity and openness.