Just a bit of beer…

Sometimes I look at my calendar and feel some concern about the amount of beer on it.

This year is turning out to be a bit heavy on the beer front, perhaps not the healthiest of hobbies? I swore I’d fit more cycling in this year but right now I’m not sure where I can fit it. An interesting thing is that there are a lot more non-CAMRA events in the schedule.

2013 kicked off with Craft Beer Rising, a beery day out that ended in BrewDog Shoreditch & too much beer. CBR wasn’t really up to the standards set by IMBC in 2012 alas, that’s my personal take on it. It was a broad shapshot of “craft” encompassing what I personally think of as true craft breweries through to the big twig-co’s (Greene King for example, meh) and some truly terrible shit pretenders (Point from the US, and some dodgy rum-flavoured crap for example).

Less beery was the Windsor & Eton Brewery weekend doing the MITIE London Revolution. Over 180 miles cycling – fun but painful! It took 3 weeks for my knees to fully recover. I’d do it again in the future though and can just hope I fit my beaut Windsor & Eton Republika jersey a bit less like a sack full of lard.

Cambridge Beer Festival happened at the end of May and as per usual I attended on several occasions. Monday, Tuesday, Wednesday, and Friday evenings I believe. With over 200 different beers there are always more I want to try than I can possibly fit in. We had our own Hitchin Beer Festival in early June. This chewed a week of leave! Up to Crewe on the Monday to pick up beer from off Beat, site set-up on Tuesday, and then Thu/Fri/Sat fest and Sun take-down. We bit off a bit more than we could chew with this this year! Bar managing and also taking over from security at 6AM every day. Thu, Fri, Sat nights: less than 4 hours sleep a night! We ended the festival utterly exhausted and I slept a lot the following week and was a tad laggy at work. It was an excellent & successful fest though.

Next event on my calendar is the North Herts Cambridge Pub Ramble that I’m running. It’ll be fun and I hope we get a good crowd along. I picked a set of pubs, all good, which form a nice loop through town and all have a bit of extra interest to them. I have put notes up on the map I’ve made for the route. After that a quick one is Off Beat’s #FirstyFriday on July 5th. We have some of their firkins out the back, empties from Hitchin Beer Festival. So why not coincide dropping them off with their little monthly at-brewery beer event? Now there’s an excellent plan coming together!

We’re all booked in for the Birmingham Beer Bash at the end of July. Both Saturday sessions including the beer-matched dinner. We scoot up via train on Friday afternoon and will be staying in the Radisson Blu just a short stumble from BrewDog Birmingham. I expect Friday may involve the consumption of just a bit of beer. Train: £129, hotel: £113, Beer Bash: £120 – over £350 spent up front. Not bad for a 2-night weekend away though I suppose. We do take our beer rather seriously, too seriously? ;)

August brings the GBBF – for which I use another week of annual leave as I am there from start-to-finish participating in CAMRA’s intensive bar/beer management course. This ought to be a blast! I’m going to be on Buster’s bar. 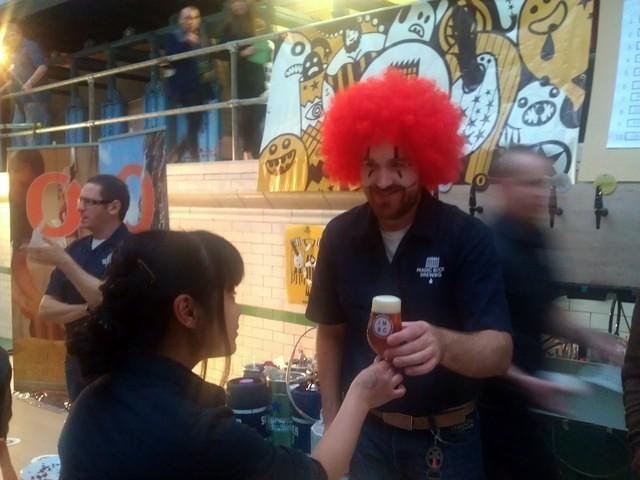 October brings IndyManBeerCon 2013! Wow, memories of 2012 still glow for me. We were booked in for this “FULL FAT” the day the tickets were released, hotel booked too – the travelodge around the corner again at an insanely-low early rate. So far IMBC is just costing £66 for tickets plus £152.50 for five nights in the hotel. (We’ll be driving up for this one.) Oh, and another week of leave booked!

I’m sure there’ll be more added to this list as time goes by. A Brodie’s gig or something similar in London is always tempting. We’ve still not seen the (now not-so) new Kernel brewery – not to mention not visited many of London’s shiny new breweries, I’m very keen to catch up with where Weird Beard are at. And, heck, we still haven’t even visited the Craft Beer Co. I also would love to get up to Edinburgh again, I’ve fallen in love with the place – though we’ve only stayed there twice. The BrewDog AGM passed us by this weekend, I was on the edge of booking that trip for weeks but decided against it in the end. The inaugural AGM was so good… I doubt future AGMs, while bigger and slicker, will live up to the memory.

Anyway – so far three of my five weeks of anual leave are given over to beer. That’s just nuts, right? I think the other two will go to a December visit back home to the family in Western Australia… where beer will certainly happen. WA’s craft beer scene is an ever-growing beast, interesting to catch in small bites every couple of years.

How much leave, travel, and time to you give to beer? Not to mention money!

We still haven’t quite graduated to making international trips just for beer events. That, I guess, is the next step. One for 2014? Copenhagen, De Molen, GABF? I’d love to catch up with beer folk in New Zealand again too. *sigh*