On dropping off some empty firkins at Hardknott brewery just before the Jubilee weekend I was lucky enough to be handed a bottle of a new beer by @HardknottSarah – it was “The English Experiment“. This beer is the result of the rumoured collaboration between @HardknottDave & @FullersJohn – do go and read Dave’s blog post about it, and definitely watch the accompanying video!

We intended to give it a try during the long weekend, which we spent tramping over hills in Galloway Forest Park. So I lugged this bottle of beer up into the hills with me – so an idea was born, how about I take a photo of the beer on top of every Donald we ascend? Yeah, it’s a bit daft – but it’s the sort of thing I do for a laugh.

It also seems quite appropriate that we started out near Bruce’s Stone above Loch Trool – the site of a battle where Robert the Bruce humiliated the English (so I read). So here’s a bit of England coming back conquer in these hills… well, sort of!

So, here is The English Experiment – Scottish hill walking beer – a photo log. 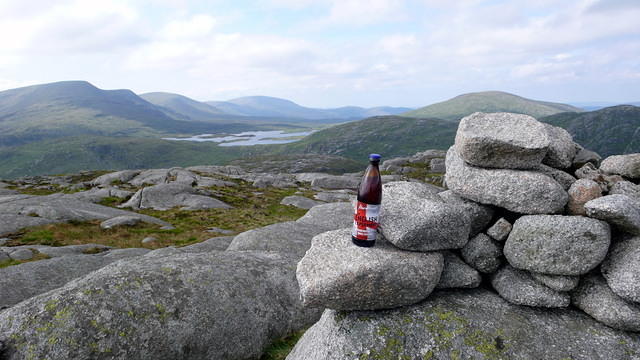 The English Experiment atop Craignaw - 645m - a Graham & Donald 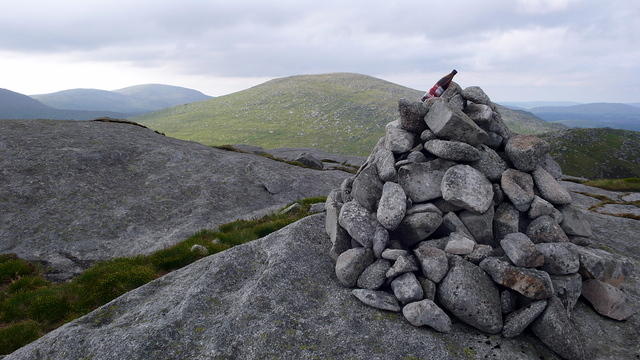 The English Experiment atop Dungeon Hill - 620m - a Donald - next destination, Mullwharchar, in the background 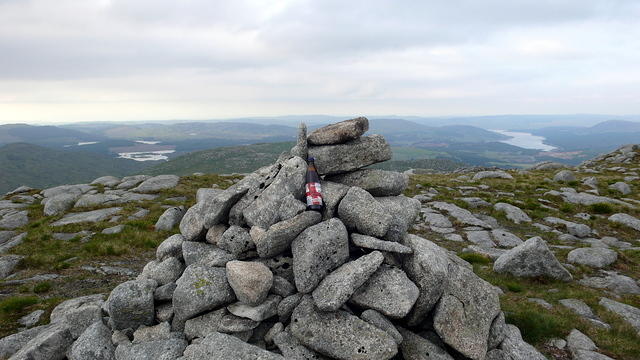 The English Experiment atop Mullwharchar - 692m - a Graham & Donald - in the distance: Loch Macaterick to the left, Loch Doon to the right

Day 2: Range of the Awful Hand 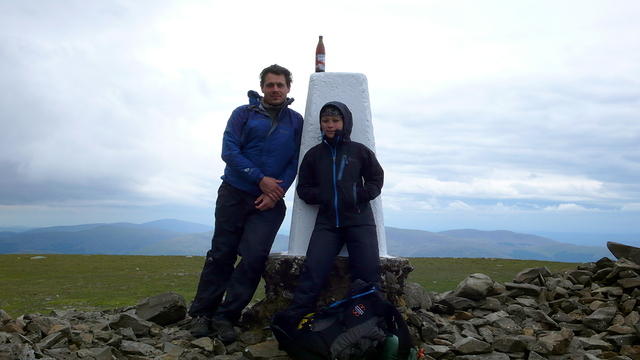 The English Experiment atop Merrick, the highest Donald of them all - 843m - a Corbet & Donald 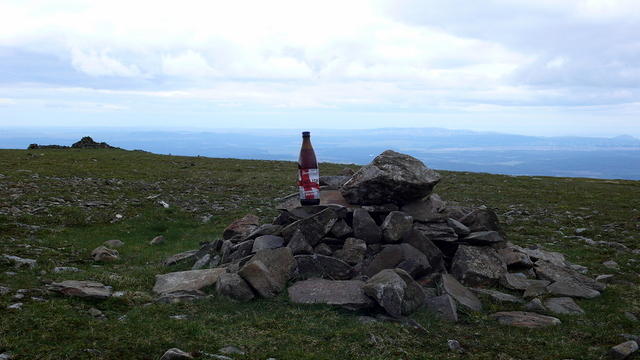 The English Experiment atop Kirriereoch Hill - 786m - a Donald 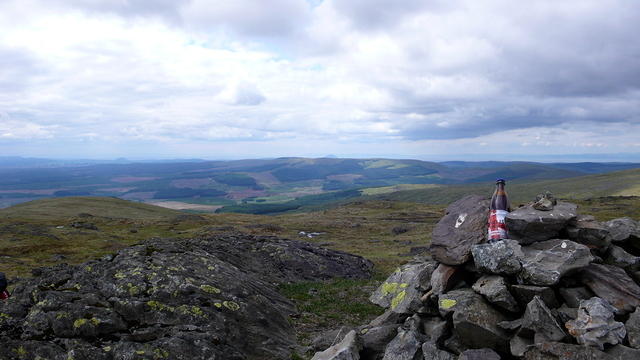 The English Experiment atop Tarfessock - 697m - a Donald 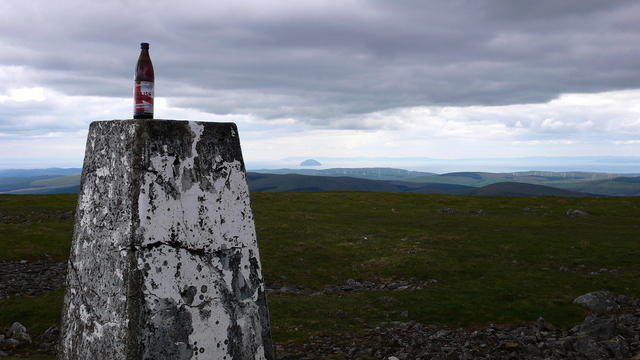 The English Experiment atop Shalloch on Minnoch - 768m - a Corbett & Donald - this is not the actual top, that's the cairn at 775m but I didn't realise at the time and didn't take a photo there!

Day 3: Rhinns of The Kells 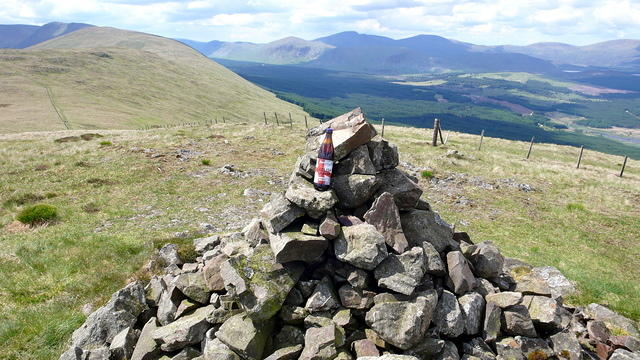 The English Experiment atop Coran of Portmark - 623m - a Donald 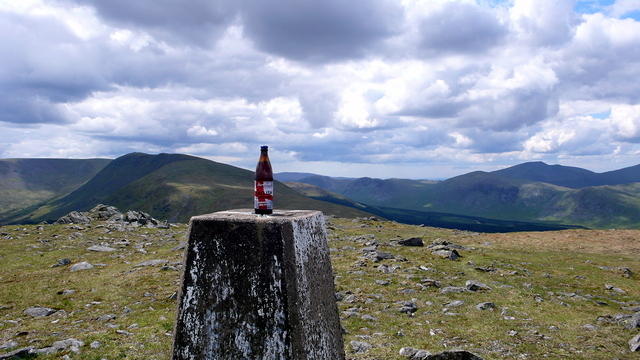 The English Experiment atop Meaul - 695m - a Donald 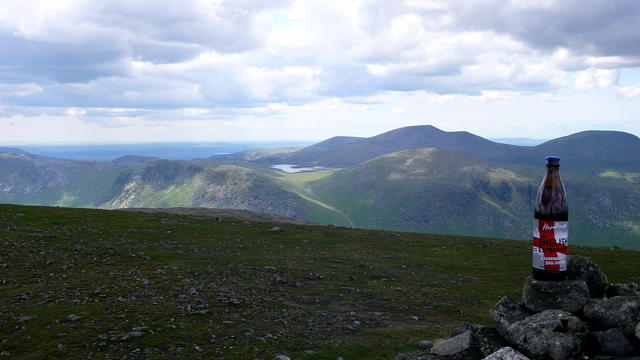 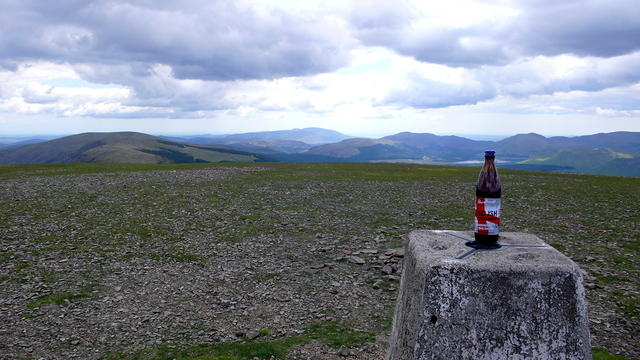 So, that’s 11 Donalds! Not bad for a weekend – and they include 3 Corbetts and 2 Grahams as well. A few more hills bagged… no, I’m not a hill bagger really, but I feel I could become one. We walked around 70km in 2.5 days, punctuated by a couple of wild camps. One idyllic, beside Loch Enoch – though it was a windy night. The other midge infested (thankfully we have a good tent) near Loch Doon.

Well, we never did get around to drinking it during the walk. It never really felt quite the right time. However, when we got home we made a point of sitting down and letting our taste-buds become acquainted with this beer. I believes it achieves its aim, it is an essentially English rendition of what most of us now think of as an “IPA” (after the US style) and the new hops do seem to add a twist of the different. (Recall I’m an Aussie, and here I am talking about “essentially English” – hah, YMMV!) Great to see work being done on developing local hop varieties, in this case by Charles Faram. I think these hops must come through with earthier and more dark-fruit tones, more alike to traditional English hop flavours – with less of the zing, citrus, and tropical fruit of new world hops. I look forward to seeing more of Landlady, Bishop, Archer, and Baron and can’t wait for someone to present them in single-hop format.  All in all, The English Experiment was a highly enjoyable beer, of a style akin to the Durham Brewery Bombay 106 IPA, rather than the likes of BrewDog’s Punk – we’ll be ordering ourselves a few more bottles from the Hardknott shop shortly!

What you want to do is get yourself to the official release at The Rake in London early in the evening of Monday June 11th – The English Experiment will be available in cask! Hope I can get there myself! (Might be a bit difficult alas.) Failing that, order some of this great beer online.

We did get to drink one beer during our walk at least – the other bottle I was lugging with me was a Hardknott Code Black. Another excellent beer. Now, if only Hardknott put some of their beer in cans so once the beer is drunk the remaining pack weight is much less! 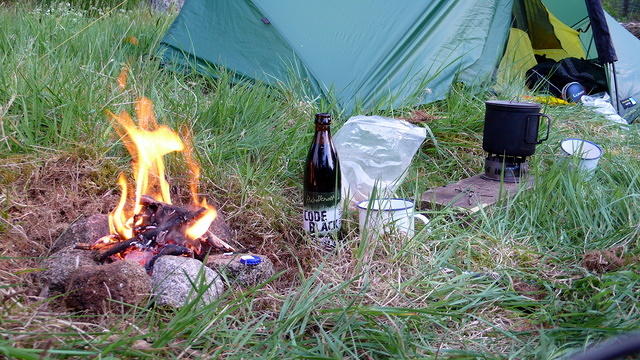 Camp near Loch Doon - real fire, necessary to keep the midges at bay!

One thought on “The English Experiment”