Time filters the memory. Hopefully in the weeks since this beer matching dinner at Alimentum not too much of the detail has been filtered out of mine. As the afternoon progressed on the 16th of May I noted a tweet by @MelissaCole to say there were still a couple of spaces available at the Beer and Food Matching Dinner at Alimentum in Cambridge. I work in Cambridge but had held off from booking, as a scan over the web-page when I first heard of it left me feeling uninspired. In hindsight I’m not really sure why – I think the beer selection failed to tickle my fancy and I was terribly distracted with house-moving at the time. On the spur of the moment, with the other half in London for the evening, I thought “eh, why not give it a go!” A tweet and a phone-call later I was booked in for the evening. 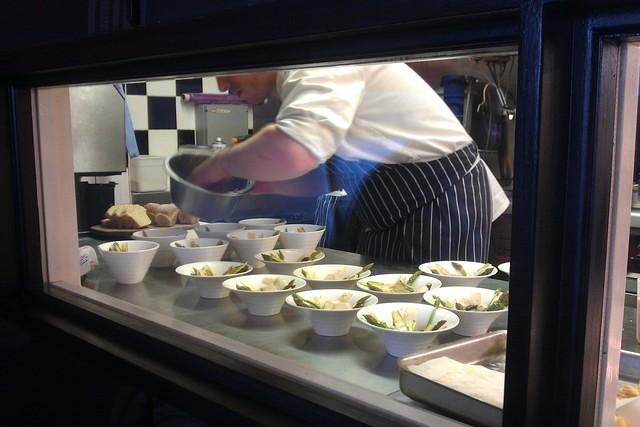 A window through to the kitchen gives a sneek-peek at our 1st course being prepared – windows a double glazed, so you can’t hear all the swearing I presume!

Despite me being in my work “uniform” of shorts and t-shirt the staff at Alimentum were welcoming and led me to the function room. (I had forewarned that I’d not exactly be wearing a first-class-restaurant quality of dress!) Along with Melissa – there were about 6 other people present, and over the next few minutes the rest of the seats gradually filled to make up an audience of 16, including 3 women – quite lopsided, and I expect the balance at a wine-tasting evening would have been more even. Generally the folk present were probably older than me, and on asking indicated that food and beer matching was an unfamiliar concept. I gathered that they were probably interested Alimentum customers, as opposed to myself being a beer geek visiting Alimentum for the first time. Beer and food matching is not new to me – I’ve encountered it via BrewDog of course – but, going back, the concept isn’t entirely uncommon in Australia. In Sydney for example there was always a hint of it at the James Squire place (now King Street Brewhouse), and even more so at Red Oak. We also had the Belgian Beer Cafés which were a celebration of beer & food with hardly a glass of wine in site. (I’m thinking 7 years ago – there is a much higher level of “craft beer” geekery in Sydney, and Australia in general, these days.)

My interest in this sort of thing comes from another direction as well – growing up in a restaurant with chefs for parents has given me a strong appreciation for good & interesting food. I’ve tried my hand at beer matching myself several times – with varied, but mostly positive, results. Christmas 2010 for example, and the odd thing here and there, I did a great vegetarian feast for 2011 too – alas I haven’t had time to document it! (Hm, feeling inspired now.)

So – enough gasbagging – on with the subject. We were greeted with glasses of Oakham’s JHB (4.2%) – a beer I’m generally indifferent to on cask, not hoppy enough & lacking body. However this was a particularly fine & zesty example – a recent bottling perhaps. It’s also an extra 0.4% on the ABV scale – so a bit of a different beer really. With its fresh zingy hop notes it did a good job of freshening the palate after a day in the office. 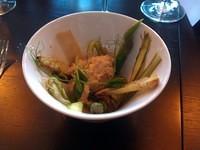 “Easy drinking, fresh and fun, this is a delightfully delicate delight that’s perfect to usher in the Spring with its fresh grassy aromas and tinkly lime-like end.” 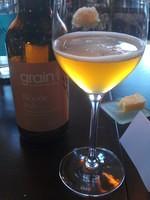 A celebration of asparagus! We had a variety of different forms of this luscious summer shoot – steamed, grilled, fresh pickled (I think), and puréed. There were even very thin crispy slices of asparagus very reminiscent of bamboo-shoots. The rich crab rounded things out, the morel added zing & body.

I’m a fan of Grain ales and this one is no exception. It has a real taste of summer to it, with its distinctive wheat-beer notes. In this course the beer led on flavour, with the asparagus providing texture and a complementary fresh, green, and earthy backbone.

“This is a classic mild from a brewery local to the restaurant. Full of rich toasted coffee and chocolate aromas and flavours it punches far above its ABV with its full flavours.” 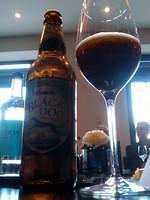 A mild? Really… I was surprised to find this on the menu. I’m no mild-basher, I actually really like the style, especially in this typical form of dark & low-ABV.

The dish was an intense little morsel of rich flavours – the gravy incredibly rich and creamy. Was there a hint some chocolate in there perhaps? I’d have this for breakfast every day and never get bored of it. Livers are a favourite, and this is like the toast you put with a roasted bird with the seared liver – sometimes the best part of the dish by far. In fact I’d be perfectly happy with all liver & no chicken in this case! Nothing at all wrong with the ballotine, it provided some good meaty texture – but I’d not have missed it I think.

How did the mild stand up to this? Surprisingly well… Black Dog is fairly full-flavoured as milds go and stood up to the intensity of the food. It is light enough to be a refreshing chaser to the bold flavours – but has complimentary flavour notes so as to not be too jarring. A lack of bitterness also helps here as I think a more bitter style of beer may bring out bitterness in the liver. 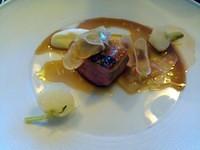 “Brewed with rhubarb, grains of paradise, vanilla and orange peel this funky, dry and extremely fruity little number will stimulate even the most jaded of pallets with its riot of flavour.” 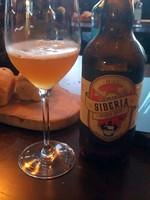 Probably the least memorable dish in terms of the food for me – I certainly recall enjoying it but I’m very hazy on the details. A chunk of tasty duck with some sweet young blanched turnips and thin slices of radish.

The beer however was more stand-out. This is one that Melissa Cole helped devise on a visit to Ilkley brewery – light, refreshing, and incredibly moreish. I found the vanilla notes very forthright in the flavour. This is one of those smooth and approachable saisons –  Melissa said this beer could do with a bit more time in the bottle – I’ll be looking out for it. In fact I’m looking now… you can buy Ilkley beers individually from BeerRitz or by the box at MyBreweryTap. (I’ve just ordered myself 12 bottles.)

I can’t honestly remember how it went down with the food. It seems more likely than not that it was a good match. 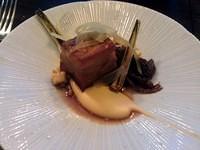 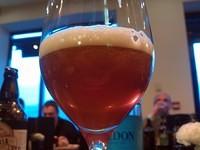 *pow* The smoked pork belly with the sweetcorn purée was outstanding. Charred spring onions were an excellent counter. Unctuous is the appropriate word here.

In fact the poor old XX was a bit beaten down by the food in this course, a reasonable accompaniment but it just wasn’t really possible to appreciate the XX once the pork had been sampled.

What could have fared better against such a full-on morsel? Perhaps a more vinous barleywine style of ale, or something along the lines of a strong “English IPA” (rich bitter and hoppy, definitely above 6.0%, and using peppery/earthy hops – not floral/citrusy).

“A deceptively pale beer this is not for the faint hearted, full of rich caramelised orange and candied grapefruit aromas, it has an added layer of stewed apricots in the middle before ending on a sweetish note that is almost like burnt sugar.”

Stand. Out. Course. So simple, yet every element perfectly formed and matched. The “Waldorf textures” concept is adorable, the flavours exciting both individually and in combination. Apple in the form of a sorbet. A drizzle of walnut oil. All alongside an excellent cheese served at the right temperature (not frigid).

The beer? Another great match – fruity esters compliment, while the Sauternes-like depth is a perfect offset to the Cambridge Blue.

I can relive this course in my mind with some clarity – memorable. 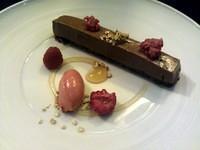 “Aged in Highland Park whisky barrels, Ola Dubh is an unctuous beast of a beer. Actually meaning black oil is slinks out of the bottle bring with it aromas of soy, marmite, chocolate, whisky and so much more. Intensely complex, dangerously drinkable and best served in a brandy baloon or large red wine glass to enjoy its aroma.” 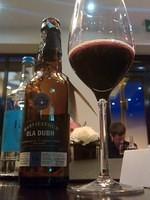 I’m not really a dessert sort of person. When I do have desserts I prefer them on the savoury side, and often find myself more tempted by the cheese selection. This dessert was just too sweet for me. Make the mousse more dark and bitter and I’d be OK I think. It all tasted great, and the fresh tangy raspberries worked hard to bring up the balance a bit. The whisky gel was an excellent acompanyment and went some way to marrying the dessert with the beer. Toasted oats – my kind of flavour. Just too sweet!

The beer on the other hand is exactly my sort of thing – I have a huge “sweet tooth” for big, rich imperial stouts. Aged in whisky barrels? Even better! The sweetness of the dessert did really change the nature of the beer though, normally quite deep and characterful it seemed a lot lighter and drier by comparison – and thus far too easy to drink at 8.0%! The match worked fairly well – but again the dessert was too cloying for me, remove some sugar and it would have been perfect. The combination of flavours was just right. I’d very happily drink this beer with just a bowl of fresh raspberries and a block of 85% dark chocolate!

- EPITAPH TO THE EVENING -

It really was an excellent night and I’d love to see a repeat performance. I’ll definitely be re-visiting Alimentum, beer or no beer. (The usual beer selection isn’t very inspiring, and in normal circumstances I’d be drinking wine given the choices available. Perhaps after this event they will put some more thought into the beer list… but are there there enough Customers in Cambridge who will appreciate that?) After the meal we got to sit and chat a bit with Melissa and Mark Poynton (the driving force behind Alimentum) – discussing beer, food, and the paring of the two. Mark stated that beer is easier to work with than wine – one of the reasons being that wine is more sensitive to temperature. Personally I also think beer presents more flavour dimensions, more easily accessible, and thus gives a broader spectrum to play with.

The other attendees were impressed with how well beer can work in such a haute cuisine context. The consensus was that given the opportunity they’d do it again, some may even try beer matching at home. Great to hear, a bit of “spreading the word” to help make your average punter more appreciative of beer as a high quality and versatile beverage.

Congratulations to both Mark Poynton & Melissa Cole for running a successful and enjoyable evening. It was a pleasure to meet them too, people earnest & passionate about two of my favourite things: great beer and great food.