There’s a stigma attached to canned beer. It’s cheap, lowbrow, and tastes awful. I’ve always thought so. Back home in the country a typical beer was a “tinny” of something like Emu Bitter, Emu Export, or Victoria Bitter (Australia’s favourite beer?) When I was younger I always hated beer and considered the contents of a tinny to taste… well, tinny. But perhaps, all along, the problem has been that all the beer I’ve tried from a can has simply been crap beer? I can’t say I like any of the aforementioned beers in bottled form either.

Wind forward a couple of decades and I’m in the UK. Nothing has changed my opinion of canned beer, to be honest the matter never comes up because no beer I’m likely to drink is available in cans. Then along comes BrewDog – they have a shocking suggestion: how about we package our Punk IPA in cans? Queue much derision from the beer-loving community. (Well, actually, I’m not sure if there was much outcry. The chatter in the blog comments and on the BrewDog shareholder forum was mostly positive and supporting – then again we’re talking about a bunch of people that kiss the ground that BrewDoggers walk on.)

In practical terms cans have a lot to offer, quoting from a can of Maui Big Swell IPA:

Welcome to the
MICROCANNING
REVOLUTION…

Cans eliminate light damage
and reduce the risk of oxidation,
keeping our beer fresher
than in bottles!

Cans are lighter, chill quicker,
and can be enjoyed on beaches
and in sensitive environments.
Aluminum is the most recycled
and most eco-friendly material.

I’m not going to verify all those claims, but they certainly paint a damn fine picture. In the end however, as far as I’m concerned, the proof is in the tasting!

Unfortunately I’m probably not going to be able to try the same beer side-by-side from can and bottle until BrewDog’s Punk IPA cans hit the market. However, I can do a bit of an IPA side-by-side with similar beers to see how the canned beer shapes up. Our contestants are:

[Note: My nose/palate seems unfortunately slightly low-resolution today. Not unwell, just not enough sleep perhaps. Still enjoying the beer and lots of flavour, just not picking out the level of flavour I’d normally find in the Punk IPA.]

These are all great beers! I wish I’d tried a blind tasting because the Odell and Maui beers are very similar. I think the Odell was a little rounder in flavour, and the Maui crisper – could I call that “tinny”? No, I call it slightly hoppier and a little more bitter (despite the lower published IBU.) “Tinny” is such a horrible word, let’s move on to woodier thoughts.

I think that if I were asked in a blind tasting of all three beers to pick which came from a can I’d have chosen the Punk IPA. It’s certainly got the hops and bitterness turned up a notch or two. This Maui IPA is even “bottle conditioned”, pouring with a slight haze of yeast. It was certainly the liveliest of the beers and the side of the can bears the words “Live Beer! Keep Cold!”

But what about a beer that isn’t supposed to have tinny (shudder) notes? A porter perhaps? We can do that! Maui’s CoCoNut PorTeR: 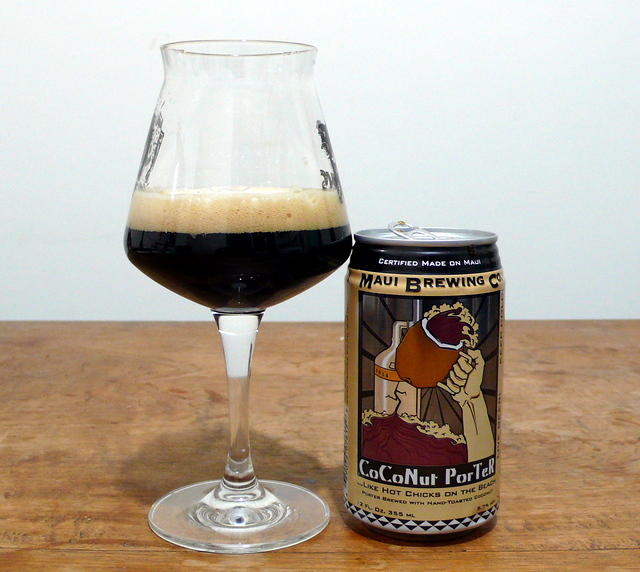 This is a bloody tasty beer. Deep toasted malt flavours, lots of chocolate, slightly soured malty sweetness, light yet distinct trailing toasted coconut flavour. I love it, I’d certainly drink this again. As with the Big Swell IPA, I really couldn’t say whether the can makes any difference as I don’t have the same beer handy in bottled form. (In fact, it’d have to be from the same batch ideally.) There isn’t anything “bad” or notably “tinny” about the beer, and it is highly enjoyable. This is a beer I’ll buy again. Both the Maui beers are beers I’ll buy again. I’m thinking of buying a case of both in fact – this is perfect hiking beer, no lugging heavy glass bottles around! I hope BrewDog really do run with the cans; long live canned craft beer! 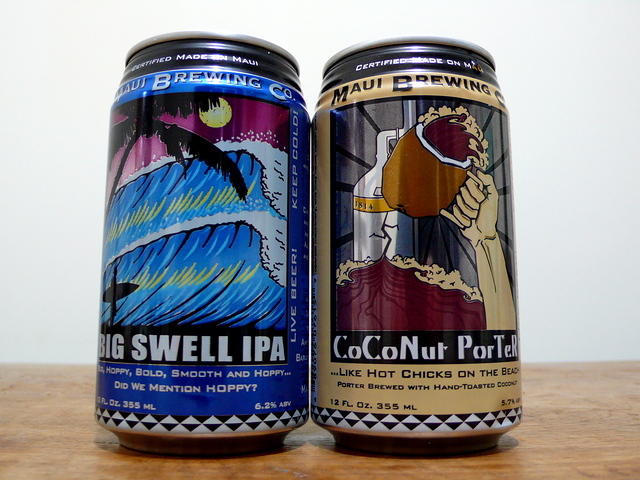 I, for one, hail our mighty canned overlords!