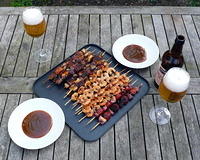 It is well and truly BBQ weather this weekend and you don’t want to spend much time in the kitchen with the sun shining so wonderfully outside. So knock together a quick marinade, pop some bits into it, then do a spot of gardening. A couple of hours later we’re ready to skewer and BBQ! This particular recipe was inspired by BeerReviews Andy’s “Punk Prawns“, however the only similarity is the bringing together of beer and prawns.

First thing to do is knock up the marinade, I chose the Infra Red “oxymoronic IPA ruby red and as hoppy as a bucketful of frogs” from HardKnott brewery as the base for the marinade as it has a good rich malty body as well as a nice hit of aroma hops. I think using a typical golden hoppy beer wouldn’t work so well, the malty richness is necessary for the marinade and dipping sauce. Anyway, toss all this into a bowl: 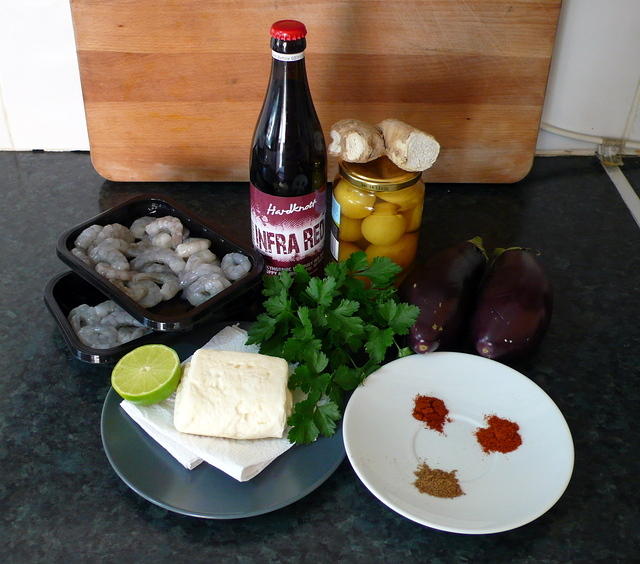 I made two different shish kebabs, one just prawns and the other a vegetarian option: aubergine & halloumi. Halloumi is great stuff – cheese you can BBQ! I can’t believe I never came across it back home in Australia. Put the prawns straight into the marinade, I used 6 prawns per skewer (they have such piddly little “king praws” here in the UK) and made 7 shish kebabs. Cube the halloumi and the aubergine to around the same size, roughly 1 inch per side. Put everything into the marinade, pop the lot into the fridge, and wait a couple of hours. I gave it a bit of a shake after an hour too. Also, I put the skewers into the marinade so that they’re less likely to burn on the BBQ – you can just soak them in water though. (If you’re feeding actual vegetarians it is probably polite to marinate the vege stuff and the prawns in separate containers!) 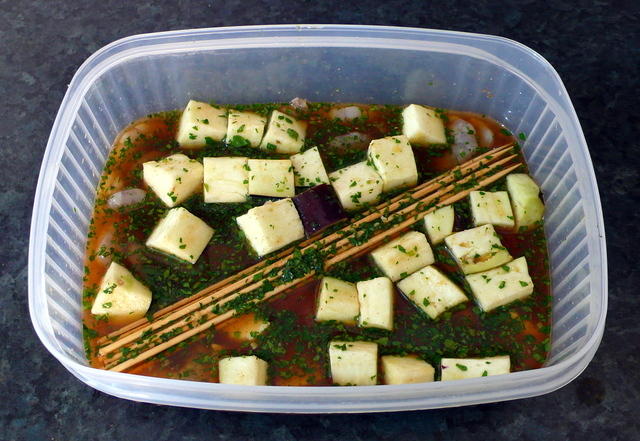 When the marinating is done it is time for skewering. For the vegetarian skewers I used 3 pieces of halloumi alternated with 5 pieces of eggplant, and also added squares of red onion between these.

When the skewering is all done prepare the dipping sauce. This is really easy! Strain 1 cup of the marinade through a fine sieve and heat this in a small saucepan until simmering. Then dissolve 8 teaspoons of light-brown sugar into the marinade. Mix 2 teaspoons of cornflower into a couple of tablespoons of cold water and drizzle this into the marinade while whisking steadily. Continue to whisk while the marinade simmers and thickens. Give it about 5 minutes on the heat then set aside. You can warm this up again later before serving. 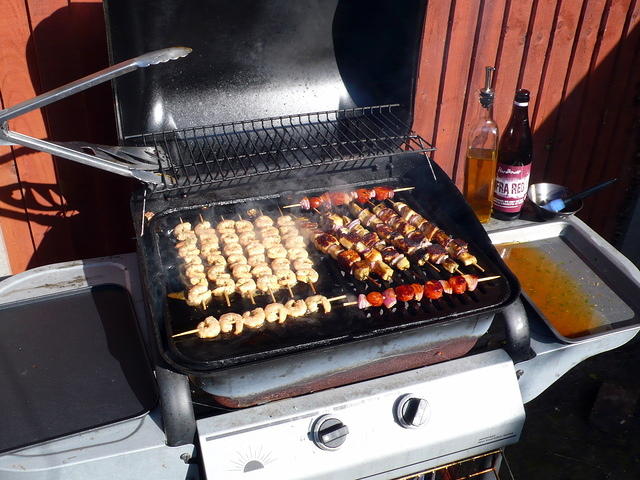 BBQ time! Drizzle the shishkebabs with a little oil and BBQ them. Not much else to say about that is there.

This is ideally served to people straight off the BBQ. Have bowls of warmed dipping sauce handy and enjoy! It goes down well with a beer of course – and in this case we had it with a crisp cold Sharp’s Monsieur Rock. 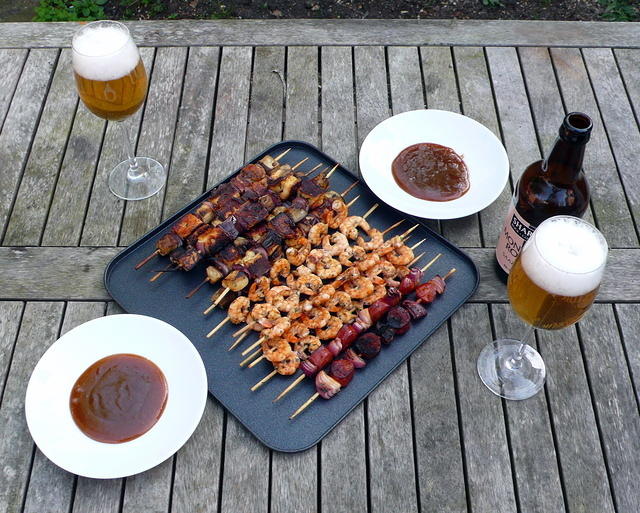